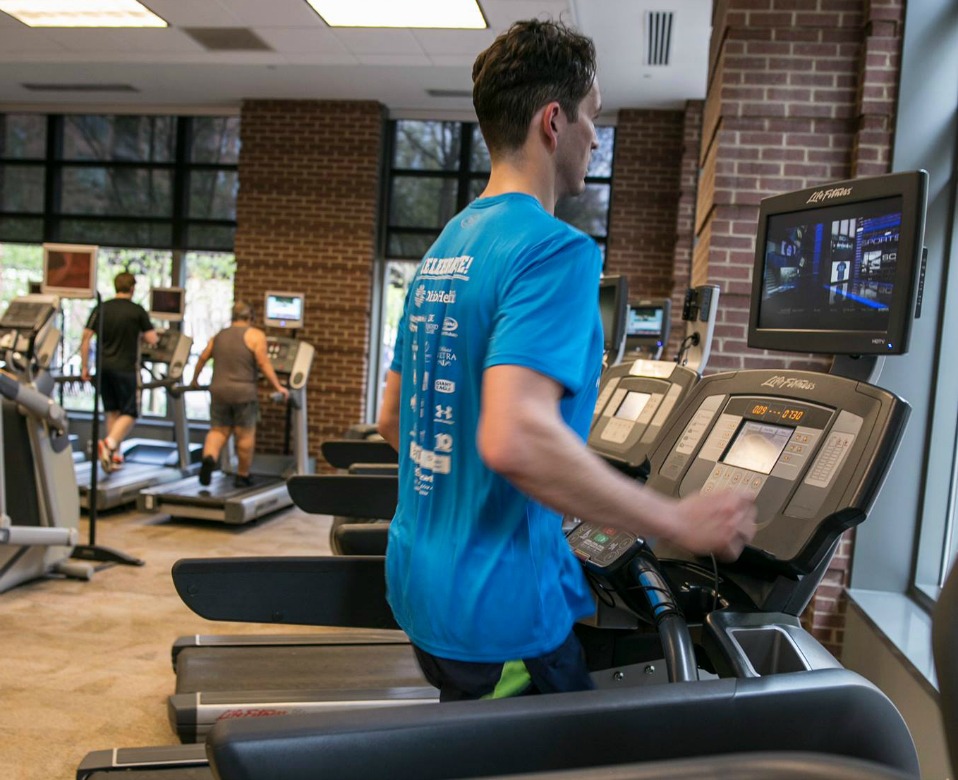 The cable news ban is now in effect as gyms nationwide see a peak in attendance as members dive in head-first to meet their New Years goals. (Or to burn off whatever effect the holidays may have had both physically and mentally.) In an effort to provide the best environment possible to meet one’s fitness goals, one large gym chain has decided to make a significant change.

Gyms typically offer a combination of classes and non-led workouts, i.e. using one of the many cardiovascular machines or lifting weights. As a culture that doesn’t take boredom well, most of us want to be entertained while exercising, whether we watch the TVs overhead, the individual screens on our workout equipment, listen to a Podcast or music, or really old school—read. But the gym chain, Life Time Fitness has decided to eliminate one of the major options offered—watching cable news. The removed channels include CNN, Fox News, MSNBC, and CNBC, so its a bipartisan move. Why the shift? The chain states that it doesn’t fit with a “healthy way of life.” In a statement on Twitter they said: 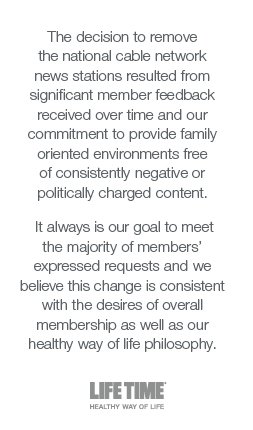 They also commented that they want the gym environment to be free of “consistently negative or politically charged content”… sounds like the news cycle, right?

What can one watch? USA, A&E, Discovery, HGTV, and ESPN. So you can dive into Cupcake Wars or watch shark attacks, but not one politician attacking another. The cable news ban has been met with positivity as well as criticism as some folks welcome the change and others feel its overly censoring their workout experience.

Whatever their motive, numerous studies have shown that our constant access to news has not had positive effects on our psyche.

In general, it has been found that watching TV news can negatively affect one’s health and mood. In fact, in a study reported by Harvard Business News, researchers found that hearing negative news broadcasts can have an immediate effect on stress level, and can make you less effective at work. So if you’re starting your day working out and catching the news, you might be setting yourself up for not only a less positive outlook on your day but you may also end up less motivated. The researchers state, “we believe that negative news influences how we approach our work and the challenges we encounter at the office because it shows us a picture of life in which our behavior does not matter. The majority of news stories showcase problems in our world that we can do little or nothing about… believing our behavior is irrelevant in the face of challenges is called, “learned helplessness,” which has been connected with low performance and higher likelihood of depression.”

Their suggestion? Turn off the news alerts. And, cancel the noise.

And maybe Lifetime is on track with this one..Changing the station.

Melissa, Editorial Director
Melissa B. Williams is a freelance writer and editor based in Louisville, Colorado. She previously served as the Editorial Director for Healing Lifestyles & Spas for 10 years and remains a frequent contributor.

Latest posts by Melissa, Editorial Director (see all)
Previous ArticleHow I Unintentionally Set My Intentions and The Universe Took Note.
Next Article 7 Anything But Boring Ways to Eat More Fruits & Veggies.